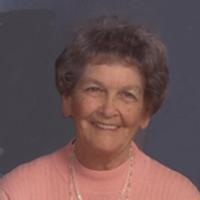 Louise was born October 17, 1919, in Providence, RI, a daughter to the late Charles and Cecilia (Young) Swanson.

Louise was a 1937 graduate of East Providence High School in Rhode Island.

Louise was a bookkeeper and billing clerk for several years. She was a member of St. Catherine LaBoure Catholic Church in Cahokia, IL for 47 years.

Louise enjoyed reading, playing card especially Bridge and Rummy, crossword and jigsaw puzzles, going on Sunday drives to see the fall colors, and loved all of God's creation. She was a very wise, thoughtful person and always was thinking of others. Her sunny disposition earned her the nickname "Smiley" at the nursing home. Louise was very strong in her faith with a special devotion to Our Mother of Perpetual Help. She was a very devoted wife, mother and grandmother and will be greatly missed by her family.

In addition to her parents and her spouse of 64 years, she was preceded in death by: one daughter, Susan Elizabeth Bryer; one grandson, Dennis Michael Skaggs, Jr.; one sister, Dorothy Soderlund and husband Clifford; three brothers, Charles Swanson and wife Rita, Lloyd Swanson and wife Thelma and Howard Swanson and wife Evelyn.

Visitation will be held from 9:00 a.m. to 11:00 a.m. on Tuesday, September 20, 2016, at Immaculate Conception Catholic Church in Loose Creek. Mass of Christian Burial will follow at 11:00 a.m. with Fr. Louis Nelen and Fr. John Schmitz as the concelebrants. Interment will be in Lakeview Memorial Cemetery in Fairview Heights, IL on Wednesday, September 21, 2016.

Expressions of sympathy may be made to Immaculate Conception Catholic Church.

Funeral arrangements are under the direction of Morton Chapel, Linn, Missouri (897-2214) www.mortonchapel.com

To order memorial trees or send flowers to the family in memory of Louise S Bryer, please visit our flower store.