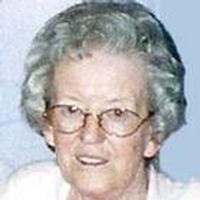 Louise was born September 25, 1929 in Argyle, a daughter to the late August and Henrietta (Renneke) Deeken.

Louise graduated from the Potts School in Osage County and was later employed at St Mary's
Hospital in Jefferson City as well as St Mary's Hospital in St Louis. She worked for Hewlett Packard in Loveland, CO and the Dunes Casino in Las Vegas for 25 years before moving to Linn.

Louise was an animal lover and had many pets over the years. She was particularly fond of her three dogs, Susie, Heidi and Rusty. She enjoyed her visits to Lake Mead when she lived in Las Vegas as well as fishing, antique cars and spending time with her family.

Louise is survived by, one brother; Gerald Deeken of Linn, two sisters; Pat Lieneke of Holts Summit and Marie Lieneke and her husband Marvin of Chamois, two sister-in-laws; Marilyn Deeken of Jefferson City and Mary Ruth Deeken of Linn, one brother-in-law; Hadley Joyce of Linn as well as many nieces, nephews and a dear friend; Virginia Backman of Las Vegas. In addition to her parents Louise was preceded in death by two brothers; Wilbert and Norbert Deeken, one sister; Berniece Joyce and a brother-in-law; Herbert Lieneke.

Mass of Christian Burial will be 10:30 a.m. Thursday, September 9, 2010 at St George Catholic Church in Linn with Fr. I.C. Medina as the Celebrant. Interment will follow in St George Church cemetery.

Expression of sympathy may be made to St George Church, St George Cemetery or to the charity of the donor's choice

To order memorial trees or send flowers to the family in memory of Louise R. Deeken Erickson, please visit our flower store.
Send a Sympathy Card