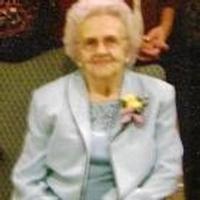 Lucile M. Whertvine, age 85, of Linn, formerly of Chamois, peacefully went to be with her Lord and Savior Jesus Christ on Thursday, April 21, 2011, at her daughter's residence in Linn.

Lucile was born January 7, 1926, in Chamois a daughter to the late, Fritz and Emma (Krueger) Vahrenberg.

She was 1944 graduate of Chamois High School.

Lucile was a loving homemaker and daycare provider. She was an active member of the First Baptist Church where she taught Sunday school, Vacation Bible School and the youth. Her biggest love was her family.
She had a lifelong love for children and Lucile's home was always open to family and friends.
Lucile was an avid scrabble player and she enjoyed cooking

In addition to her husband and parents, she was preceded in death by: one daughter, Cheryl Beasley Henry; one granddaughter, Jessica Knight; one brother, Earl Vahrenberg; one sister, Ruby South Harshaw; one son-in-law, James Beasley; and her first husband, John Huerner.

Funeral Services will be at 11:00 a.m. on Monday, April 25, 2011, at the First Baptist Church in Chamois with Rev. Larry Hendrickson officiating. Interment will follow in the Chamois City Cemetery.

To order memorial trees or send flowers to the family in memory of Lucile M. Whertvine, please visit our flower store.