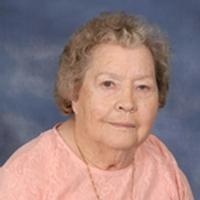 Lucille was born September 17, 1930, in Chamois, a daughter to the late Henry and Thelma (Wohlgemuth) Nichols.

Lucille was a 1948 graduate of Chamois High School and worked as a secretary for the Langenberg Hat Factory as well as being a licensed insurance agent for the Chamois Mutual Insurance Company for a number of year. She also worked for the Osage County Assessor's office as a secretary before retiring.

Lucille was a member of Linn Family Worship Center and enjoyed reading, collecting sets of dishes and bird watching.

In addition to her parents and husband of 36 years, Lucille was preceded in death by one sister, Henrietta Hoffman; one brother, Delmar Nichols and a nephew, Kevin Nichols.

Interment will be in the Deer Creek Cemetery in Chamois.

To order memorial trees or send flowers to the family in memory of Lucille Fern Bascom, please visit our flower store.