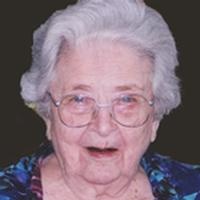 Luella was born October 17, 1910, in Osage County, a daughter to the late Richard and Keturah (Potts) Mantle.

Luella was a member of the Fairview Church of Christ.

She enjoyed gardening and fishing. Cooking her famous fried chicken for her family on Sundays and taking care of her animals. Luella was very devoted to her church and Bible and her greatest joy was spending time with her family, especially her grandchildren, great-grandchildren and great-great-grandchildren. She will be greatly missed by those who knew and loved her.

In addition to her parents and spouse of 48 years, Luella was preceded in death by two sons and daughter-in-law, Howard Pinet and Harvey and Ruth Pinet; three brothers, Doc, Willard, and Ted Mantle; three sisters, Ruby and Rose Pinet and Beulah Malan; one grandson, Eugene Allen "Bo" Pinet and his wife Jackie; and one great-grandson, David.

Visitation will be held on Thursday, August 6, 2015 from 10:00 a.m. until 12:00 p.m. at Morton Chapel in Linn. Funeral services will follow at 12:00 p.m. with Rev. Phillip Lyon officiating. Interment will be held Fairview Cemetery near Linn.

Expressions of sympathy may be made to the Fairview Cemetery or to the Good Shepherd Pantry.

To order memorial trees or send flowers to the family in memory of Luella K. Pinet, please visit our flower store.