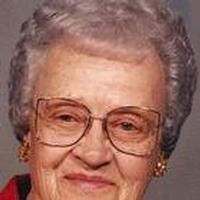 She was born in Mint Hill, MO on April 2, 1917, a daughter of John Phillips and Ida (Duncan) Phillips.

Mae was a homemaker and was employed for many years in various retail stores in Linn.

She enjoyed cooking, quilting, crocheting and spending time with family and friends. She and Charley also actively served in their church and were loved by all.

In addition to her parents and husband, she was preceded in death by: one grandson, Scott Baker and eight siblings.

Funeral Services will be at 10:00 a.m. on Tuesday, September 7, 2010, at Community Christian Church with Minister John Tarbet officiating. Interment will follow at Oklahoma Church of Christ Cemetery.

To order memorial trees or send flowers to the family in memory of Mae Baker, please visit our flower store.