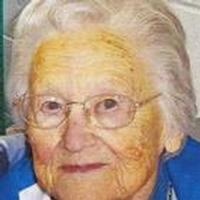 Manillia attended the one room school house in Hope through the eighth grade.

Manillia was a homemaker and a long time member of the Oklahoma Church of Christ and the Hope School Quilting Club.

She enjoyed quilting, gardening, the St. Louis Cardinals and traveling with her husband as long as it was not on a boat or a plane but her greatest love was spending time with her family.

In addition to her spouse and parents, she was preceded in death by: one brother, Virgil Stock; four sisters, Opal Stock, Rebekah Stock, Goldie Kemper, and Bernice Leimkuehler; and a son-in-law, Kenneth Mohr.

Expressions of sympathy may be made to the Oklahoma Church of Christ Cemetery Fund or a charity of the donor's choice.

To order memorial trees or send flowers to the family in memory of Manillia O. Enloe, please visit our flower store.