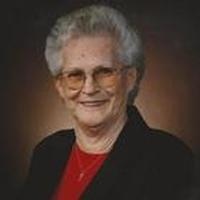 Marcellene was born October 2, 1925, in Chamois, a daughter to the late Jule and Hattie (Holland) Perrey.

She was a lifelong area resident and a homemaker. Marcellene worked at Overman's Pants Factory in Chamois, at Linn Manufacturing and Ottenhammer's Coat Factory in Belle as well as Chesebrough-Ponds in Jefferson City.

In addition to her husband and parents, Marcellene was preceded in death by one sister Margaret Benson and a granddaughter Dawn Love.

Funeral Services will be held at 10:00 a.m. on Monday, May 14, 2012, at Morton Chapel with Fr. I.C. Medina officiating Interment will follow in the Linn Public Cemetery.

Expressions of sympathy may be made to Hospice Compasses.

To order memorial trees or send flowers to the family in memory of Marcellene R. Senevey, please visit our flower store.