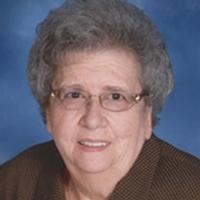 Marcie M. Dudenhoeffer, age 80, of Linn, passed away on Wednesday, August 31, 2016, at Linn Living and Rehab Center in Linn.

Marcie was born on November 5, 1935, in Linn, a daughter to the late Theodore and Catherine (Adelhart) Linnenbrink.

Marcie was a 1953 graduate of Linn High School.

Marcie was employed as a clerk for Three Rivers Electric Coop. She was a very devoted member of St. George Catholic Church in Linn.

Marcie enjoyed listening to country music, embroidery, flower gardening, reading, going shopping and out to eat. However, her greatest love was the time spent with her family.

In addition to her parents and husband of 53 years, Marcie was preceded in death by three sisters, Leona Jaegers, Lillian and Loraine Linnenbrink and two brothers, Norbert and Wilbert Linnenbrink.

Mass of Christian Burial will be held at 10:00 a.m. on Tuesday, September 6, 2016, at St. George Catholic Church in Linn with Rev. Daniel J. Merz as the celebrant. Interment will follow in the St. George Parish Cemetery.

Expressions of sympathy may be made to the charity of the family's choice.

To order memorial trees or send flowers to the family in memory of Marcie M. Dudenhoeffer, please visit our flower store.