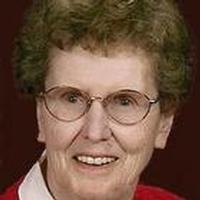 Marian was born June 9, 1922, in Loose Creek, a daughter to the late Henry and Henrietta (Helmers) Lock.

Marian was a homemaker and also worked at the Osage County Assessor's Office in Linn and Scholastics until her retirement in 1987.

Marian was a member of the Immaculate Conception Church in Loose Creek and belonged to the Ladies Auxiliary of the Knights of Columbus in Bonnots Mill, a member of the Osage County Historical Society, St Ann's Sodality and the sewing club.

She enjoyed spending time with her family, bowling, playing cards, sewing and her dogs.

In addition to her parents and husband, Marian was preceded in death by two brothers, Howard and Edward Lock.

Expressions of sympathy may be made to the Immaculate Conception School or the American Heart Association.

To order memorial trees or send flowers to the family in memory of Marian H. Schmitz, please visit our flower store.