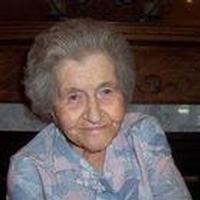 Marie was born September 11, 1921, in Jefferson City, a daughter to the late Stephen and Barbara (Struemph) Boes.

On August 14, 1946, Marie was united in marriage to Michael Eisterhold in Rich Fountain. He preceded her in death on November 16, 1997.

Marie was a homemaker and worked as a cook at the Sacred Heart Catholic School in Rich Fountain.

Marie was a member of the Sacred Heath Catholic Church, the Sewing Circle, and St. Ann's Sodality. She enjoyed quilting, crocheting and working word puzzles.

Mass of Christian Burial will be at 10:00 a.m. on Friday, December 28, 2012, at Sacred Heart Catholic Church in Rich Fountain with Fr. Philip Niekamp as the Celebrant. Burial will follow at the Sacred Heart Parish Cemetery.

Expressions of sympathy may be made to Sacred Heart Catholic Church.

To order memorial trees or send flowers to the family in memory of Marie B. Eisterhold, please visit our flower store.