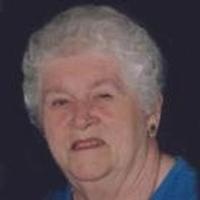 Marie, as she was always known to her family and friends, was born in St. Louis, MO, on May 25, 1920, a daughter to the late Albert P. and Caroline (Vrona) Richardson. Marie's mother died when she was 4 years old and Mr. Richardson married Catherine Mebruer in 1929 and she became a loving stepmother to Marie. They moved to a farm southeast of Linn.

Marie attended the Mount Ariel School near Linn. On September 25 1940, Marie was united in marriage to Herman Voss in Linn at St. George Catholic Church. He preceded her in death on December 12, 2009. They suffered the loss of their second child, Carl Albert while living on the farm.

Shortly after, they moved to Linn and took over operation of Al's CafAC.. In 1956, they purchased Cricket's CafAC. in Loose Creek, which they operated until the fall of 1969.

Marie was famous throughout the area for her delicious fried chicken dinners and homemade pies. Herman and Marie spent most of the rest of their remaining years at their home in Linn until they moved to a nursing home due to illness in September of 2009.

Marie was a member of St George Catholic Church in Linn. She was an avid St. Louis Cardinals fan and enjoyed gardening, flowers and cooking.

In addition to her parents, husband and son, Marie was preceded in death by 3 brothers, Al, Paul and Fred Richardson.

Interment will follow in St George Parish cemetery in Linn.

To order memorial trees or send flowers to the family in memory of Marie Voss, please visit our flower store.