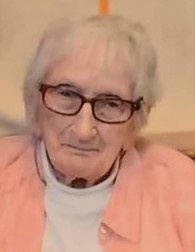 Marge was born on October 4, 1916, in Linn, a daughter to the late Victor and Alta (Bacon) Pinet.

She attended Flora School near Linn until the 8th grade. Marge was a 1935 graduate of Linn High School.

From 1962 until 1997, she and her husband owned and operated Campbell Trailer Park in Linn.

Marge was a member of St. John’s United Methodist Church and the Order of Eastern Star.

In addition to her parents and spouse of 58 years, she was preceded in death by one son, Keith Campbell.

Expressions of sympathy may be made to St. Johns United Methodist Church or to the Stratman Apartments.

To order memorial trees or send flowers to the family in memory of Marjorie Amelia Campbell, please visit our flower store.