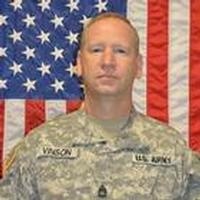 Mark A. "Spud" Vinson, age 52, of Chamois passed away Saturday, May 17, 2014 at his residence surrounded by his loving family.

Mark was born January 11, 1962 in Keokuk, IA to Edward and Bernice (Caldwell) Vinson. He was a 1980 graduate of Keokuk High School.

Mark was a member of Calvary Assembly of God in Jefferson City. He was an anointed drummer actively involved in worship. He also enjoyed being a Royal Ranger commander at Linn Family Worship Center.

Mark loved music, especially playing his drums. Another hobby he enjoyed was tending his goats. Most of all he enjoyed spending time with his family. He was a man who loved and honored God in everything he did.

Mark is survived by: his wife of 32 years; his mother of Keokuk, IA; one daughter, Heather and Charles Lewis of Lake Sherwood; three brothers, Ed and Judy Vinson of Venice, FL, Terry and Darla Vinson of Keokuk, IA and David Vinson of Keokuk, IA; five sister-in-laws, Sandy and Don McLeland of Milford, IA, Brenda and Cliff Bennett of Holts Summit, Wanda and Mike Sadler of Belle, Elsie and Terry Sadler of Linn and Anita Buddemeyer of Bland as well as many nieces, nephews, relatives and friends.

Funeral services will begin at 11:00 a.m. in the church with Rev. Jeff Higbie officiating.

Interment with full military honors will be held at 3:00 p.m. Friday, May 23, 2014, in the Missouri Veterans Cemetery in Waynesville.

Expressions of sympathy may be made to the family of Mark Vinson.

To order memorial trees or send flowers to the family in memory of Mark Vinson, please visit our flower store.