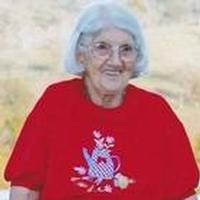 Martha Backes, age 95 of Frankenstein, passed away Wednesday, July 3, 2013, at her daughter's residence near Rich Fountain.

Martha was born November 5, 1917, in Frankenstein, a daughter to the late J. Gus and Nellie (Haslag) Kremer.

On September 9, 1947, she was united in marriage to Joseph John Backes in Frankenstein. He preceded her in death on June 19, 1990.

Martha was a lifelong member of Our Lady Help of Christians Catholic Church in Frankenstein and a member of St. Ann's Sodality. She enjoyed quilting, gardening and was known for her strawberries however, her greatest love was spending time with her children and grandchildren.

Mass of Christian Burial will be held at 10:00 a.m. on Monday, July 8, 2013, at Our Lady Help of Christians Catholic Church in Frankenstein with Fr. I.C. Medina as the Celebrant. Interment will follow in Garden of Gethsemane Cemetery.

Expressions of sympathy may be made to St. Mary's Catholic School in Frankenstein.

To order memorial trees or send flowers to the family in memory of Martha Backes, please visit our flower store.