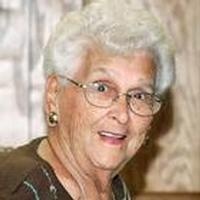 Martha was born September 17, 1917, in Osage County, MO, a daughter of the late August and Regina (Koenigsfeld) Franken.

A lifelong resident of the Linn community, Martha graduated from St. George School and in 2010 she received the Distinguished Graduate award. She worked many years for Goff's Store and Thriftway Market.

Martha was an active member of St. George Parish, The St. Ann Sodality Society, the VFW Post 4756 Ladies Auxiliary, and The Knights of Columbus Auxiliary.

In addition to her parents and husband, she was preceded in death by: two daughters, Kay Gentges and Barbara Sue Otto and two brothers, Vince and Ben Franken.

Mass of Christian Burial will be at 10:00 a.m. Monday, January 10, 2011, at St. George Church in Linn with Fr. I.C. Medina as the Celebrant and Fr. Edwin Schmidt and Fr. Brendan P. Doyle as concelebrants. Interment will follow at the St. George Church Cemetery.

In lieu of flowers expressions of sympathy may be made to the St. George Parish School Fund.

To order memorial trees or send flowers to the family in memory of Martha M. Otto, please visit our flower store.