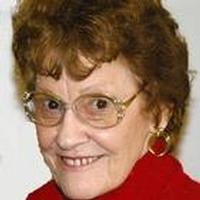 Martha was born March 8, 1927, in Bonnots Mill, a daughter of the late James E. and Seda (Smith) Wilson.

Martha was a homemaker and a member of Cathedral of St. Joseph in Jefferson City.

Martha is survived by: three daughters, Wanda McNamee of Arnold, Carol Laboube of New Haven, and Karen Huff and her husband Gregory of O'Fallon; one brother, Floyd Wilson of Linn; seven grandchildren, six great grandchildren, one great great grandchild as well as many nieces, nephews, and friends.

In addition to her parents and her spouse, Oliver, she was preceded in death by: her first husband, Randall E. Loethen, three brothers, and one sister.

Mass of Christian Burial will be at 11:00 a.m. on Monday, September 12, 2011, at Most Pure Heart of Mary Catholic Church in Chamois with Fr. David Means as the Celebrant. Interment will follow in Chamois City Cemetery.

To order memorial trees or send flowers to the family in memory of Martha F. Schieder, please visit our flower store.