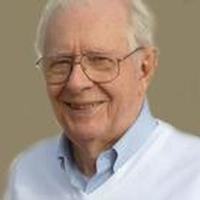 Martin George Rudroff, age 88 of Raleigh, NC, formerly of Rich Fountain, passed away peacefully on October 1, 2012, after an extended illness. He was a devoted son, husband, father and grandfather and he will live in our hearts forever, and now rests in peace without pain with his Lord and Savior.

Martin was born on February 7, 1924, in Rich Fountain, a son to the late Martin and Margaret (Grellner) Rudroff. He was the eldest of 5 children and spent his youth on a nearby farm leading to his graduation from Sacred Heart School.

Martin served during World War II in the Army Air Corp and retired as a Lieutenant Colonel in the Air Force Reserves. His love of flying continued throughout his life and it was a sad day when he ""retired"" the wings of his single engine plane.

Surpassing his love of flying, was the love of his life for 67 years, Mary Agnes Gilpin, whom he met at a U.S.O. dance at the University of the Alabama in 1944 and subsequently married in 1945. Following the war, Martin served in Occupied Japan where Mary joined him and returned stateside to attend college at the University of Missouri, in Columbia earning a degree in Electrical Engineering.

Following graduation, Martin moved to Winston-Salem, NC where he began his career of 30 years as a Senior Engineer with Bell Labs. As a brilliant engineer, Martin was responsible for the development of numerous patents and inventions as well as working on classified military communications projects.

Upon retiring, Martin and Mary moved to Fairhope, Alabama where he enjoyed his sailboat, Civil Air Patrol and several volunteer community charities. During this period of their lives they were fortunate to have the opportunity to travel extensively. In 2010, a final move was made to Raleigh, NC, to be closer to family.

In addition to his parents, Martin was preceded in death by his daughter, Catherine Louise Rudroff and brother, Fritz Rudroff.

A Funeral Mass celebrating Martin's life, will be held at 10:00 a.m. on Monday morning, October 8, 2012, at Sacred Heart Church Catholic Church in Rich Fountain with Fr. Philip Niekamp as the celebrant. Interment will follow in the Sacred Heart Parish Cemetery.

In lieu of flowers, contributions can be made to Hospice of Wake County, 200 Hospice Circle, Raleigh, N.C. 27607 or to a charity of the donor's choice.

To order memorial trees or send flowers to the family in memory of Martin George Rudroff, please visit our flower store.