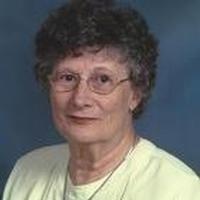 Mary was born December 2, 1931, in St. Louis, a daughter to the late Peter and Francis (Krieg) Boehmer.

Mary was a homemaker and raised her family in South St. Louis. Later she moved to Fenton, MO where she was a member of St. Paul's Catholic Church and the Ladies Sodality. Mary was always available to help with funeral luncheons and was a member of the Sunday collection "accountants" who were responsible for the weekly collections.

Mary enjoyed visiting relatives in Rich Fountain, where her parents were natives, as well as traveling and spending time with her grandchildren.

In addition to her husband and parents, Mary was preceded in death by one son, Thomas Amptman.

Funeral Mass will be held at 11:00 a.m. on Wednesday, March 28, 2012, at Sacred Heart Catholic Church with Fr. Philip Niekamp as the Celebrant.

Graveside services will be held at 2:15 p.m. on Thursday, March 29, 2012, at Jefferson Barracks National Cemetery in St. Louis with Fr. Joe Welschmeyer officiating.

To order memorial trees or send flowers to the family in memory of Mary F. Amptman, please visit our flower store.