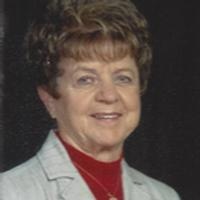 She was born on March 29, 1930, in Folk, a daughter to the late Bernard and Elizabeth (Schoenauer) Bax.

Mary Jane was united in marriage to Edgar C. Frank, on September 15, 1948, at St Anthony of Padua Catholic Church in Folk. Edgar preceded her in death on December 26, 2014.

Mary Jane was a member of the St. George Catholic Church, Fraternal Order of Eagles, and Veterans of Foreign Wars Ladies Auxiliary.

Mary Jane enjoyed spending time with her family, and especially her grandchildren and great grandchildren. She took great pride in her home and yard. Nothing pleased her more than to have a spic and span clean house, freshly mowed lawn and beautiful flowers everywhere. In her younger years, nearly every Saturday night was spent dancing with her sweetheart, Edgar.

In addition to her parents and spouse of 66 years, she was preceded in death by: one sister, Hilda Libbert; one brother, Herbert Bax, four brothers-in-law, Norbert, Elmer and Bill Frank and Andrew "Pat" Libbert; three sisters-in-law, Agnes and JoAnn Frank, and Irene Bax.

Mass of Christian Burial will be held at 11:00 a.m. on Tuesday, August 16, 2016, at St. George Catholic Church in Linn with Fr. Daniel J. Merz as Celebrant. Interment will follow in the St. George Parish Cemetery.

In lieu of flowers, expressions of sympathy may be made to St. George Catholic Church Outlay Campaign in Linn.

To order memorial trees or send flowers to the family in memory of Mary Jane Frank, please visit our flower store.