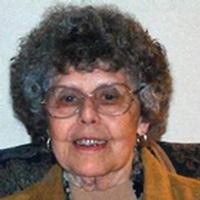 Mary Ruth was born March 7, 1925, in Linn, a daughter to the late Guy and Nola (Branson) Vaughan.

Mary Ruth was a 1943 graduate of Linn High School.

On November 15, 1947, she was united in marriage to Charles E. Lansford in Harrison, Arkansas. He preceded her in death on November 5, 1988.

Mary Ruth was a homemaker in addition she worked for the REA, Vogel Insurance, Osage County Draft Board, Linn Public School as a secretary and the Soil Conservation Office as well as volunteering at the Osage County Library.

Mary Ruth was a member of St. John's United Methodist Church where she served as the church pianist, VFW Post #4756 Ladies Auxiliary, Order of the Eastern Star, and the Osage County Historical Society.

She loved researching family history, providing transportation to friends for doctor's appointments and shopping, summer picnics and church socials. Mary Ruth loved the town of Linn and its surrounding creeks and rivers.

In addition to her parents and spouse of 40 years, she was preceded in death by: a grandchild, Jessica Lansford; a sister, Esther Ann Fowler; one niece and one nephew.

Funeral Services will be held at 12:00 p.m. on Monday, March 16, 2015, at Morton Chapel with Rev. Floyd Gudde officiating. Interment will follow in Linn Public Cemetery.

Expressions of sympathy may be made to St. John's United Methodist Church or Osage County Historical Society.

To order memorial trees or send flowers to the family in memory of Mary Ruth Lansford, please visit our flower store.