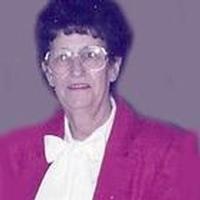 Mary was born February 25, 1929, in Linn a daughter to the late Albert and Maude (Butler) Mosley.

Mary attended the Victory School as a child. She worked for Linn Manufacturing for 19 years and Interco Distribution in Jefferson City for 24 years before she retired in 1999.

Mary was member of the Community of Christ Church of Linn and the Order of the Eastern Star. She enjoyed quilting, gardening, canning and making jelly.

She is survived by: one son, Albert L. and his wife Rae Jene Mantle of Bonnots Mill; one stepson, Virgil Dean Mantle of Centralia; one stepdaughter, Karen Kay Johnson of Boone, NC; four sisters, Imogene Monroe of Linn, Martha Vaughan of Linn, Mayme Smith of the State of Arkansas, and Marcella Sherrill of Chicago, IL; 15 grandchildren, 21 great grandchildren and 3 great great grandchild.

In addition to her parents and husband, she was preceded in death by: an infant daughter, Virginia Kay Mantle; four brothers and three sisters.

Funeral Services will be at 10:30 a.m. on Friday, March 9, 2012, at Morton Chapel with Pastor Kathy Amsinger officiating. Burial will follow in the Community of Christ Cemetery in Linn.

To order memorial trees or send flowers to the family in memory of Mary L. Mantle, please visit our flower store.