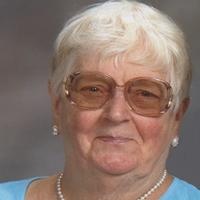 Maryann was born on May 14, 1936, in Wardsville, a daughter to the late Clarence and Grace Schepker.

Maryann was a 1954 graduate of Linn High School.

On June 23, 1956, she was united in marriage to Hugo Martin Backes at St. George Catholic Church in Linn. He survives at Westphalia Hills Retirement Center.

In addition to being a homemaker, Maryann was employed at Osage County Welfare Office, News Tribune and Missouri Department of Revenue until her retirement from the State in 2005 after 23 years of service.

Maryann enjoyed fishing, going to “the boat”, jigsaw puzzles, living at the river and spending time with her grandchildren and great grandchildren.

In addition to her parents, she was preceded in death by an infant daughter, Maryann Backes and one sister, Evelyn (Schepker) Thoenen.

To order memorial trees or send flowers to the family in memory of Maryann F Backes, please visit our flower store.