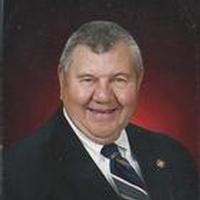 Merrill was born September 12, 1934, on the family farm near Chamois which has been in the family since 1832. He was born in the house where he later raised his family and where he lived until the house burned on July 28, 2012. He was the son of Moses William and Hanna Augusta (Wiele) Townley.

Dr. Townley was united in marriage to Norma Jean Pardun of Gilman City, MO on July 20, 1963. Together they raised three children: Greg, Bruce, and Brenda. Merrill and Norma Jean have had a wonderful life as they worked together in business and in service to their community. They enjoyed travel to every state in the nation and to all but 2 continents.

Merrill was a devoted Christian, husband, father, farmer, veterinarian, legislator, church deacon, Soldier, author, 4-H leader, and community leader. He was baptized at a young age and lived his whole life with a strong faith which he carried and shared until his final day.

Merrill raised hogs and cattle as he worked his way through college and continued to raise cattle as he practiced veterinary medicine throughout his career in Osage, Gasconade, Cole, Miller, Callaway, Moniteau, Montgomery, and Maries Counties.

His military service began with his enlistment in the Army Reserve in 1957. He served in the field artillery and as the state veterinarian for the Missouri National Guard where he conducted food inspection for Guard posts in the state. He also participated in Medical missions to Guatemala and Bolivia. He completed a total of 24 years in the Army Reserves and retired at the rank of Lieutenant Colonel.

He served in the Missouri Legislature as a State Representative for 20 years during the period of 1982 to 2004.

Merrill's dedication to the greater good of society was demonstrated through his leadership in organizations such as the Chamois Lions Club, Osage County Ambulance Board, Chamois School Board, Missouri Cattlemen's Association, MFA, Missouri Farm Bureau, American Legion, and the Osage County Historical Society.

Merrill was a friend to anyone he met. Even when a salesman or veterinary client showed up at supper time, he insisted that they come in and eat supper with the family. He loved to stop at coffee shops frequently when traveling the countryside so that he could "get the news".

Survivors include his wife of 49 years; his 3 children and their spouses; and his 12 grandchildren: Greg Townley and his wife, Janet, of Prairie City, IA (Andrew, Jenny, Megan, and Hanna); Bruce Townley and his wife, Elisabeth, of El Paso, TX (Zhenya, Alisa, Andrei, Caleb, Abbie, and Steven); and Brenda Tilawen and her husband, Jeremy, of Kansas City, MO (Devin and Katrina). He was preceded in death by his parents and one grandson, Timothy.

An additional visitation will held Monday, November 12, 2012, from 9:00 to 11:00 a.m. at the Fairgrounds Road Church of Christ located at 1316 Fairgrounds Road in Jefferson City with funeral services at 11:00 a.m. Friends and family will gather at Morton Chapel in Chamois at 3:00 p.m. and interment will follow in the Townley Cemetery near Chamois.

Expressions of sympathy may be made to Fairgrounds Road Church of Christ, Townley Cemetery Fund, or the Dr. Merrill Townley Scholarship Fund.

Arrangements are under the direction of Morton Chapel, Chamois, MO. (763-5522)

To order memorial trees or send flowers to the family in memory of Merrill M. Townley, please visit our flower store.