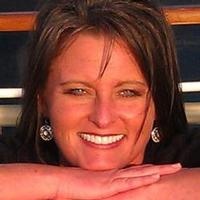 Michelle was born on May 27, 1969, in Springfield, Missouri, to Maynard and Linda Larson Wallace.

Although she spent her early childhood years in Butler, Missouri, she called Forsyth, Missouri home most of her life.
Throughout her childhood and high school years in Forsyth, she enjoyed participating in athletics and music.

Michelle loved to explore for creatures in Swan Creek and water ski on Bull Shoals Lake.

She attended and graduated from College of the Ozarks. It was during college that she began working at the Mickey Gilley Theater, in Branson, which turned into a 25+ year career. During much of that time, she served as General Manager and brightened the days of co-workers, locals, and tourists with her friendly nature, sense of humor, kind heart, and beautiful smile.

She greatly enjoyed fishing, boating, camping, and singing karaoke with friends and family.

Michelle is survived by her husband of 23 years, Shawn Nilges, and their son, Seth. She is also survived by her parents Maynard and Linda Wallace of Thornfield, Missouri; one brother, Michael Wallace, also of Thornfield; one sister, Nicole Keller of Pittsburg, Kansas; her father-in-law and mother-in-law, Butch and Pat Nilges of Linn; two nieces, seven nephews, one great-niece, and two great-nephews.

She was preceded in death by her grandparents, uncles, Mike, Don, Leo, Charles, and Gail; Aunt Charleen; and, sister-in-law Dawn Love.

Visitation will be held on Thursday, April 27, 2017, at the Whelchel Grace Funeral Home in Forsyth, MO

Arrangements are under the direction of Whelchel Grace Funeral Home
Forsyth, MO
www.whelchelgracefuneralhome.com
417-546-4757

To order memorial trees or send flowers to the family in memory of Michelle Lea Nilges, please visit our flower store.