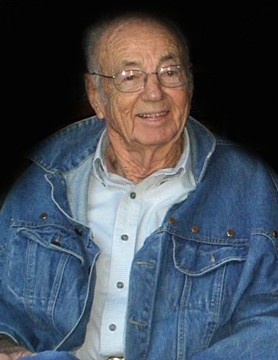 Muriel Elmer Waters, age 98, of Chamois, passed away Thursday, December 20, 2018, at his residence in Chamois.

Muriel attended school in Chamois and proudly served his country as a member of the Merchant Marine during World War II.

He was employed by Central Electric Company in Chamois until his retirement in 1986.

Muriel was united in marriage to Maurine Ann Roux. She preceded him in death on February 26, 1983.

On August 12, 2014 Muriel was united in marriage to Mary Glavin. She survives of the home.

Muriel was a member of the Jefferson City Eagles Club Aerie 2693, a past board member of the United Bank of Chamois, now Heritage Bank and a past member of the Osage County R-1 School Board.

Muriel enjoyed being outdoor doing the things he enjoyed like, working on the farm, black powder shooting, hunting, fishing and gardening. He also loved to dance.

In addition to his wife Mary, Muriel is survived by: one son, Ed Waters and his wife Peggy of Jefferson City; one step-son, Chris Schrimpf and his wife Keri of Kirkwood; one sister, Manilla Boss of Tomball, TX; three grandchildren, Scott (Kim) Waters, Erin Marberry and Megan (Scott) Hamblin; two step granddaughters, Alivia and Isabelle Schrimpf; six great grandchildren, Jack, Maxwell and Alexander Marberry, Brayden and Colton Waters and Kaden Hamblin as well as many nieces and nephews.

In addition to his parents and his first wife, Muriel was preceded in death by a great grandson, Nicholas Marberry and four sisters, Alice Curtis, Archie Curtit, Jewell Weiher and an infant sister as well as a nephew, Ron Curtis.

Graveside services will be held for family and friends at 1:00 p.m. on Friday January 4, 2019, at the Chamois City Cemetery with Rev. Shane Crum officiating.

To order memorial trees or send flowers to the family in memory of Muriel Elmer Waters, please visit our flower store.