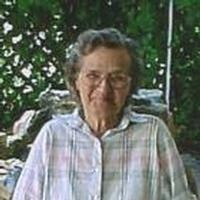 Myraline was born on August 22, 1922, in Wichita, KS, a daughter to the late Rollo Ray and Ada Estelle (Caulkins) Parsons.

Myraline was a homemaker and loving mother to her nine children. She worked for a short time during World War II at an airplane factory in Kansas.

Myraline enjoyed watching and feeding birds, especially hummingbirds. She liked riding horses, loved her pets, enjoyed taking care of her flowers and house plants, and her family enjoyed her cooking and baking which she did often because Myraline had a sweet tooth.

Funeral Service will be held at 3:00 p.m. on Friday, October 10, 2014, at Morton Chapel in Chamois with Almira Zimmerman officiating. Interment will follow in the Deer Creek Cemetery near Chamois.

Expressions of sympathy be made to the Osage County R-1 School District in Chamois.

To order memorial trees or send flowers to the family in memory of Myraline J Slusser, please visit our flower store.