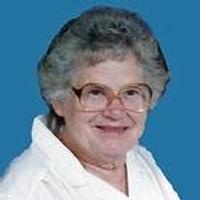 Myrtle was a homemaker and a farmer's wife. She retired from the shoe factory in Hermann. She was a member of the Zion-St. Peter United Church of Christ in Pershing and its Women's Fellowship. She loved gardening, reading and cooking for her family but her greatest joy was spending time with her family.

Myrtle is survived by her children, one son, Verney V. Vehlewald and his wife Mary Blanche of Orlando, Florida; two daughters, Valora Budnik and her husband Les of Linn and Arlene N.V. Stewart and her husband Mark of Jefferson City; five grandchildren, Rhonda Luck and her husband Rod of Linn, Dave Budnik and his wife Kimberly of Washougal, Washington, Kyle Stewart and Gary Stewart both of Jefferson City, and Brad Stewart of Columbia, and three great grandchildren, Dalton, Forrest and Sam Luck all of Linn; one sister, Adeline Lee of Kimberling City, Mo. And one sister-in-law, Anna Belle Lietzow of Sedalia; and numerous nieces, nephews and friends

Myrtle was also preceded in death by two brothers, Wilburn "Barney" and Ervin Lietzow and one sister, Helen McGuire.

Funeral Services will be held at 10:00 a.m. on Tuesday, November 5, 2013, at Zion-St. Peter United Church of Christ in Pershing with the Rev. Barb Zastrow officiating. Interment will follow in Fredericksburg Cemetery.

Expressions of sympathy may be made to the Zion-St. Peter United Church of Christ in Pershing.

To order memorial trees or send flowers to the family in memory of Myrtle F. Vehlewald, please visit our flower store.