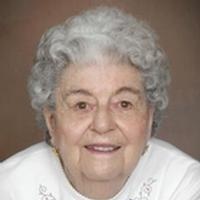 Nadine was born, March 25, 1929, in Linn, a daughter to the late Thomas and Molly (Terrill) Matthews.

Nadine attended the Ryors and Wildcat schools in Osage County as a young girl.

Nadine was a member of the First United Methodist Church in Jefferson City, the Jefferson City chapter of the Red Hatters and the VFW Ladies Auxiliary.

Nadine was a published author, having written a book of short stories and one of poems. She also enjoyed playing cards and tending to her vegetable garden.

Nadine is survived by: one sister, Dorothy Cook of Holts Summit as well as numerous nieces and nephews.

Visitation will be from 1:00 p.m. until time of service at 2:00 p.m. on Thursday, January 28, 2016, at the First United Methodist Church in Jefferson City. Interment will follow in the Riverview Cemetery.

Expressions of sympathy may be made to the First United Methodist Church.

To order memorial trees or send flowers to the family in memory of Nadine Cooke, please visit our flower store.