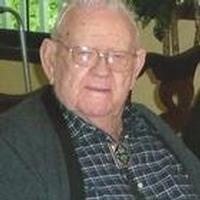 On June 24, 1939, Noel was united in marriage to Hilda (Bossaller) Baker in Chamois. She survives at Autumn Meadows in Linn.

Noel was a graduate of Chamois High School and completed several college courses. He rode a horse from his house to Flat Rock School to teach. Noel worked for the Corp of Engineers on a drege boat on the Missouri River. During the World War II, he worked in the Briggs Aircraft Plant building Bombers. After the war, he moved back to Osage County, buying his farm and started his dairy farm until he went to work for the Department of Natural Resources.

Noel worked for the Department of Natural Resources as a Supervisor for the State Parks. His last assignment was at the First State Capital in St. Charles, Mo.

Noel was a lifelong area resident of Osage County, a member of Oklahoma Church of Christ and a member of the Osage County Historical Society. He enjoyed fishing, camping, trotline, and piloting his own plane.

For many years, he and Hilda enjoyed spending winters in south Texas and other southern states. They enjoyed traveling through most of the United States and seeing the historical sites.

In addition to his parents, Noel was preceded in death by: one brother, Carl Baker and one sister, Esther Marie Baker.

In Lieu of Flowers, expressions of sympathy may be made to Oklahoma Church of Christ.

To order memorial trees or send flowers to the family in memory of Noel Baker, please visit our flower store.