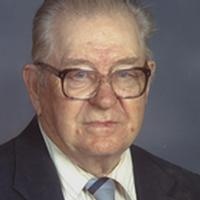 Norbert was born on September 18, 1924, in Rich Fountain, a son to the late Martin Hubert Brandt, Sr. and Bernadine Elizabeth (Bock) Brandt.

Norbert attended the Boes School during his early life and later served in the United States Army during World War II.

On August 7, 1948, he was united in marriage to Mary Ellen Rustemeyer at St. George Catholic Church in Linn. She preceded him in death on October 9, 2006.

During his early years, he attended diesel school in St. Louis and was employed on the M.V. Frank L. Blaske Boat as a second engineer.

Norbert was a farmer all his life and could be found everyday on his tractor checking his cows. He loved to garden, hunt and fish, and passed his knowledge on to his family.

From 1977 to 1989, he was employed at the Department of Corrections in Jefferson City. After his retirement, he cared for his bed bound wife for ten years.

Norbert was a member of St. George Catholic Church in Linn.

Norbert is survived by: two children, Marilyn Starke of Linn and Marvin Brandt of Bonnots Mill; two grandchildren, Eric Starke and his wife Kristina and Brad Starke and his wife Melissa all of Bonnots Mill; and the joy of his life, four great grandchildren, Jacob, Katlyn, Aaron and Emma Starke; one brother, Martin "Marty" Brandt and his wife Mary of Linn; two sisters, Hildegard Bax of Koeltztown and Sr. Regina Brandt of San Antonio, TX; a brother-in-law, Mario De Pills of Amherst, MA; a sister-in-law, Lorene Brandt of Taos; and numerous nieces and nephews.

In addition to his parents and spouse of 58 years, Norbert was preceded in death by: a brother, Roman Casper Brandt; two brothers-in-law and three sisters-in-law.

Mass of Christian Burial will be held at 10:00 a.m. on Monday, May 16, 2016, at St. George Catholic Church in Linn with Fr. Daniel J. Merz as the celebrant. Interment will follow in the St. George Parish Cemetery with full military honors.

To order memorial trees or send flowers to the family in memory of Norbert H Brandt, please visit our flower store.