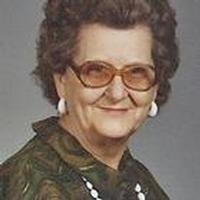 Norine C. Stiefermann, age 93 of Macon, MO, formerly of Frankenstein, passed away Monday, March 12, 2012, at her granddaughter's home in Macon.

Norine was born April 10, 1918, in Loose Creek, a daughter to the late Frank and Louise (Nilges) Brandt.

Norine attended school at St Mary's School in Frankenstein. She was a homemaker.

On September 23, 1942, she was united in marriage to Raymond J. Stiefermann in Frankenstein. He preceded her in death on January 12, 1991.

Norine was a member of Our Lady Help of Christians Catholic Church in Frankenstein and the St. Ann's Ladies Sodality.

She enjoyed quilting, card games, dancing and going on trips. She especially enjoyed the time that she spent with her grandchildren and great grandchildren.

Norine is survived by: one son, Bobby Stiefermann of Jefferson City; one daughter, Arlene McGee of Crystal River, FL; two sisters, Goldie Kliethermes of Frankenstein and Evelyn Ferguson of the State of Maryland; four grandchildren, Jim Nilges, Sherry Nilges, who Norine had lived with for the past 23 years, Robbie Stiefermann and Lori Stiefermann; eight great grandchildren, Nikole, Keith, Gabrielle, Matthew, James, Arial, Andrew and Skylar; and four great great grandchildren, Zak, Lukas, Ayden and Sage, as well as many nieces, nephews and friends.

In addition to her parents and husband, Norine was preceded in death by: three brothers, Frances, Morris, and Wilfred Brandt; one sister, Ganeva Ferguson; and one great grandson, Scotty Dale Pipes.

Expressions of sympathy may be made to Our Lady Help of Christians Church.

To order memorial trees or send flowers to the family in memory of Norine C. Stiefermann, please visit our flower store.