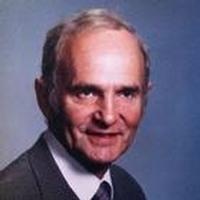 Norman H. Stover, age 77, of Linn, formerly of Jefferson City, passed away Thursday, March 3, 2011, in Linn, surrounded by his family.

Norman was born December 9, 1933, in Luverne, Minnesota, a son to the late Clifford and Agnes (Haase) Stover.

Norman attended school in Minnesota and the University of Missouri-Columbia. He was a Korean War Army veteran.

Norman was the owner/operator of Stover Carpets in Jefferson City for over 20 years. He attended Trinity Lutheran Church. Norman enjoyed sponsoring a men's softball team, fishing, and playing basketball.

Norman is survived by four sons, Matthew Stover of St. Peters, Andrew and his wife Roberta Stover of Rolla, Aaron Stover of Jefferson City, and Daniel Stover of Linn; and one daughter, Sarah Robertson and her husband William of Madison, Alabama; two step-daughters, Ellen Hegdal and Emily Hrdina, both of Pueblo, Colorado; one brother, O'Dean Stover of Camdenton; one sister, Helen Pelousky of Columbia; 12 grandchildren and four great-grandchildren; as well as nieces, nephews and friends.

In addition to his parents and wife, Norman was preceded in death by one son, Joshua Stover, one brother, Byron, and one sister, Ruth.

Norman was laid to rest with military honors on March 9, 2011, in the Missouri Veterans Cemetery at Fort Leonard Wood.

To order memorial trees or send flowers to the family in memory of Norman H. Stover, please visit our flower store.