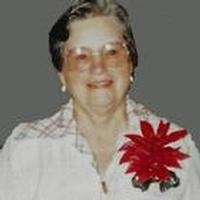 Opal was born June 24, 1932, in Washington, a daughter to the late Harvey and Gertrude "Gertie" (Brumagin) Myeburger.

Opal attended school at the Allenton School near Eureka.

Opal was a member of the First Baptist Church of Chamois and the Chamois Lions Club.

In addition to her husband of 46 years and her parents, Opal was preceded in death by one brother, Sonny Myeburger and his wife Jackie.

Funeral Services will be held at 11:00 a.m. on Wednesday, June 18, 2014, at Morton Chapel in Chamois with Rev. Kirk Kellogg officiating. Interment will follow in the Shirley Cemetery at Mint Hill.

Expressions of sympathy may be made to the Kidney Foundation or the Shirley Mint Hill Cemetery.

To order memorial trees or send flowers to the family in memory of Opal L. Crecelius, please visit our flower store.