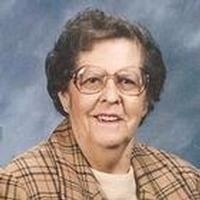 Pauline was born January 23, 1928, in Madawaska, Maine, a daughter to the late Issac and Cyprinne (Fournier) Johndro.

Pauline was a graduate of Madawaska High School.

On July 31, 1952, Pauline was united in marriage to Leland "Lee" Edward Springer at the Air Force Base Chapel in Presque Isle, Maine. He survives of the home.

Pauline was a surgical nurse at Capital Regional Medical Center in Jefferson City for eighteen years.

Pauline was a member of the 1st Presbyterian Church in Jefferson City where she was a deacon and Sunday school teacher. She was also a member of the Calvin Sunday School Class, the Operating Room Technical Service Association and had been a Girl Scout Leader when she lived in Maryville, MO.

In addition to her parents, Pauline was preceded in death by one daughter, Karen Sparks.

Interment will be in the Riverview Cemetery.

Expressions of sympathy may be made to the First Presbyterian Church or the Alzheimer's Association.

To order memorial trees or send flowers to the family in memory of Pauline T. Springer, please visit our flower store.