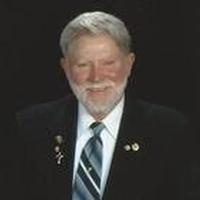 Peter F. Radmacher (Pete), age 78 of Rich Fountain, departed this life to be with the Lord on September 14, 2012, at Capital Region Medical Center surrounded by his family.

Pete was born December 21, 1933, at his home in Rich Fountain, a son to Peter B. and Gertrude (Eisterhold) Radmacher. He was the youngest of 7 children. Both parents preceded him in death.

He was married to Grace A. Ruettgers on June 21, 1958, in Loose Creek, who survives at their home.

He was a lifelong resident of Rich Fountain/Linn, where he was a barber and partner of Mid-Town Barber Shop for over 45 years until his retirement in January 2012.

Pete was a member of the Sacred Heart Catholic Church in Rich Fountain and a very active member of the Knights of Columbus. He joined the Linn Knights of Columbus in 1967. He received many honors and held offices for Outside Guard, Inside Guard, Deputy Grand Knight, Grand Knight and Warden. He received the honors of the Fourth Degree on February 20, 1982. He served as Captain in the Pope John XXIII Assembly in the years from 1982-87. Over the years, he has received many plaques in appreciation for his dedication and loyal service to the Missouri State Council Knights of Columbus. Pete was also very active in parish work. He served on the Parish Council as President, he was a member of the Adult Choir, Lector, Communion Minister, Cantor and Usher. He was president of the Linn Rural Fire Association from 1984-1987.

Pete loved to hunt and fish. He took great pride in his farm and was a master gardener. He cherished his sweetheart Grace and loved his family dearly. He knew many people and loved to tell jokes and make them laugh. He will be greatly missed by many.

He was preceded in death by his father Peter B. Radmacher five months before he was born and his mother passed away on January 20, 1954; two half-sisters, Veronica Lehman and Henrietta Lehman Badger, and one half-brother Leo Lehman.

Mass of Christian Burial will be celebrated for Pete at 11:00 a.m. on Wednesday, September 19, 2012, at Sacred Heart Catholic Church in Rich Fountain. Interment will follow in the Sacred Heart Parish Cemetery with full military honors.

In lieu of flowers, contributions can be made to Sacred Heart School, Sacred Heart Church or a charity of donor's choice.

To order memorial trees or send flowers to the family in memory of Peter F. Radmacher, please visit our flower store.