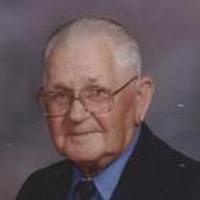 Ray attended St. Louis of France Catholic Grade and High School in Bonnots Mill where he graduated in 1938.

On February 12, 1946, Ray was united in marriage to Leona G. Linnenbrink at St. George Catholic Church in Linn. She survives of the home.

Ray served in the US Army from 1942 to 1946. He fought in the Africa and Anzio Beach Landing and also Naples, Foggia, Rome-Arno No. Apeninnes, and Po Valley. For these battles he was awarded four bronze stars.

Ray drove a truck and worked as a front-end mechanic at Knollmeyer Motors for over 20 years. In 1971, he was elected as the Osage County Clerk where he served for 16 years and he also served as Osage County 1st District Commissioner and worked part-time for the Department of Conservation.

Ray played fiddle for many years with the Schaeffer Brothers Band entertaining many residents and guests at nursing homes in Osage and Cole Counties. Ray was always happy to entertain at other social events in the area. Ray loved to fish and we all have a dustpan made by Ray from expired license plates. Ray loved to be with family and friends and share a good story.

In addition to his wife of 66 years, Ray is survived by: one son, Michael Jaegers and his wife Karen of Jefferson City; one daughter, Jean Carpenter and her husband Dan of Taos; four grandchildren, five great grandsons and was expecting his first great granddaughter in October; one sister, Delma Perrot of Bonnots Mill and many nieces, nephews and friends.

In addition to his parents, Ray was preceded in death by: his stepmother, Regina (Holzer) Jaegers; five sisters and three brothers.

Mass of Christian Burial will be at 10:00 a.m. on Thursday, June 28, 2012, at St. George Catholic Church with Fr. I.C. Medina as the Celebrant. Interment will follow in St. George Parish Cemetery with full military honors.

To order memorial trees or send flowers to the family in memory of Raymond P. Jaegers, please visit our flower store.