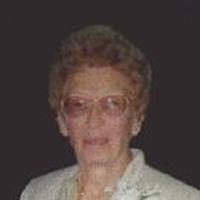 Reta was born December 22, 1917, in Mint Hill, a daughter to the late Austin and Annie (Malan) Staley.

Reta was a homemaker and enjoyed quilting, gardening, sewing, and most of all spending time with her family and friends.

Reta is preceded in death by three brothers, Russell, Marvin and Clifford Staley.

Funeral Service will be held at 10:00 a.m. on Wednesday, September 24, 2014, at Morton Chapel in Linn with the Rev. Jeff Krueger officiating. Interment will follow in the Shirley Mint Hill Cemetery near Chamois.

Expressions of sympathy may be made to the Shirley Mint Hill Cemetery.

To order memorial trees or send flowers to the family in memory of Reta G. Wolfe, please visit our flower store.