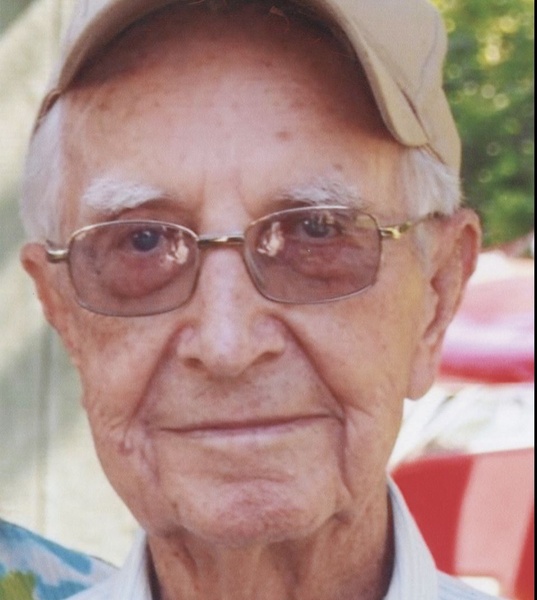 Reuben William Kormann, age 95, of Chamois, passed away on Friday, May 6, 2022, at Stonebridge/Oak Tree Villa in Jefferson City.

Reuben was born on May 12, 1926, in Pershing, the third and youngest son of John and Clara (Hilgenstoehler) Kormann.  He was baptized and confirmed at St. Peter’s Evangelical and Reformed Church (now United Church of Christ) in Pershing and was a long-time member of St. John’s UCC Church in Chamois.

Reuben grew up in the Pershing community, attending the Pershing School through the 8th grade. When school bus transportation became available two years later, he attended Hermann High School. In 1944, at the end of his sophomore year when he was 18 years old, he joined the United States Navy and served in the South Pacific at the end of World War II. In 1946, he returned to Pershing and, at the urging of his older brothers, resumed his education and graduated from Hermann High School in 1947, at the age of 21, one of four WWII Veterans to do so.

Reuben worked with his father-in-law for Kansas City Bridge Company on the Missouri River Bridge at Glasgow. He later worked for Muenks Brothers Construction Company of Loose Creek. On March 5, 1953, he began working as one of the original crew at the new Central Electric Power Plant in Chamois. He was employed there as a heavy equipment operator until his retirement in 1990.

Reuben was a member of the Chamois Lions Club since 1964, serving as treasurer for many years, and was recently presented with the Melvin Jones Award, the highest honor that can be given to a member by a local chapter. He was also a long-time member of the American Legion, Post 506 and the VFW, Post 1003.

Reuben enjoyed quail hunting with his friend, Weldon “Bud” Frey, fishing with Mickey and Bud and his wife, Corky and Reuben’s brother Vernon and his wife Bonnie. He and Bud were also business partners, purchasing a laundromat and a restaurant business in Chamois. In addition, Reuben sold and installed storm windows and doors in the area for many years. One of the things he was most proud of was developing the Hi-Land Subdivision in Chamois in the early 1970’s. Many of the newer homes in town have since been built in this subdivision.

He was preceded in death by his parents; his two older brothers, Hubert and Vernon Kormann; his wife, Mickey Kormann; his sister-in-law, Bonnie Kormann; his in-laws, Eileen and George McIntosh, Violet and Don Lynch and Delbert “Buddy” Thompson; and his mother and father-in-law, Russell and Myrtle Thompson.

Visitation will be held from 10:00 a.m. to 12:00 p.m. on Thursday, May 12, 2022, at Morton Chapel in Chamois. The funeral service will follow at 12:00 p.m. with Rev. Barbara Zastrow officiating.  Interment will be next to Mickey in the Chamois City Cemetery with full Military Honors.

Expressions of sympathy may be made to the Chamois Lions Club, c/o Nelson Sieg, 4951 Highway 89N, Chamois, MO 65024 or St. John’s UCC Church in Chamois.

To order memorial trees or send flowers to the family in memory of Reuben William Kormann, please visit our flower store.