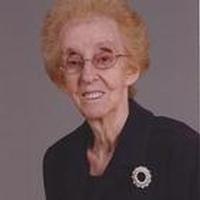 Bernice was a graduate of Linn High School.

Bernice taught school at Deer Creek and worked for Chesebrough-Pond's as an assembly line worker until she retired in 1987.

Solid Rock Baptist Church was her home church where she played the piano, taught Sunday School and Vacation Bible School. She also conducted bible study out of her home. She was past President of WMU.

Survivors include: two sons, Bruce L. and his wife Lori Smith of Jefferson City, and Bryan D. and his wife Carmen Smith of St. Ann; three daughters, Ellen M. and her husband Kenny Greer of Rolla, Sue Lange of Jefferson City, and Rhua E. and her husband Darrell Ridenhour of Belle; one brother, Roscoe White of Philadelphia, PA; two sisters, Venona Bergmeier of Topeka, KS, and Virginia Parker; 11 grandchildren, 19 great grandchildren, as well as many nieces, nephews, and friends.

In addition to husband and parents, she was preceded in death by: one brother, Nelson White; one son-in-law, Lee Vern Lange; and one great grandchild, Trevor Smith.

Funeral Services will be at 11:00 a.m. on Friday, January 13, 2012, at Solid Rock Baptist Church. Interment will follow in the Solid Rock Cemetery.

Expressions of sympathy may be made to Solid Rock Baptist Church.

To order memorial trees or send flowers to the family in memory of Rhua Bernice Smith, please visit our flower store.