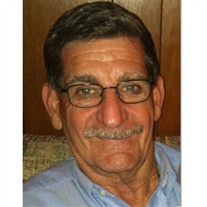 He graduated from Linn R-II High School in May 1967 and married his high school sweetheart, Vickie Schaefer on October 7, 1967.

Dick received an Associate Degree in Drafting from Linn Technical College in 1969 and after graduation worked for McDonnell Douglas Aerospace Co. in St. Louis, MO. While in St. Louis he developed an interest in motorcycles and enjoyed racing flat tracks, motocross and enduro's. Eventually, this interest led him to open his own Yamaha motorcycle shop in Jefferson City, MO. Over the years, his entrepreneurial spirit took him into many areas. After moving to Florida in 1977 he worked in the solar energy field. He designed his own solar energy collector and had manufacturing plants in Ocala, FL, Monterey, Mexico and Ontario, Canada. He began repairing hydraulic cylinders for local businesses and then opened Helmig Hydraulics which was the original contractor for the hydraulic systems at Disney’s Wild Animal Kingdom. But the work he was most proud of was as Senior Scientific Instrument Maker in the Radiology Oncology Department at Shands at UF. For nearly 20 years, he worked to improve the patient experience by building shielding devices and other instruments to aid in their care. Once his expertise in crafting one-of-a-kind solutions to problems became known, doctors in other departments began bringing him their ideas which he was able to bring to the prototype stage and on to patent and ultimately put into patient use. He is the owner of multiple patents. His hope was that his last company, Medical Tool & Technology (MT&T), would survive his passing and continue his work improving patient care.

Dick also cared deeply about Retrouvaille, a marriage ministry that he and Vickie were involved in since 1993. He considered it his way of “giving back” for the blessings he received throughout their 50-year marriage.

In addition to his life-long love of motorcycling, Dick was also an avid fisherman, a sporting clay enthusiast and he enjoyed annual pheasant hunting trips. He shared these hobbies with his family and friends. And as much as he loved his little farm in Hawthorne, he also enjoyed traveling, especially RV-ing and cruises.

Dick is survived by his wife, Vickie; his daughter Stephanie Helmig of Statham, GA; his son and daughter-in-law, Rick and Rebecca Helmig of Dacula, GA; his grandsons Jake Martinez, Kevin Martinez, and Eric Helmig. He is also survived by one sister, Reta (Ross) Seals; three brothers, Robert (Sig) Helmig, Tim (Cheryl) Helmig, all of Linn, MO, and Randy (Melissa) Helmig of St. Charles, MO; his mother-in-law, Darleen Schaefer of Linn, MO, numerous nieces, nephews and cousins, as well as many, many friends, who became family.

In lieu of flowers, the family requests donations to the St. Philip Neri Building Fund, the American Cancer Society, 2119 SW 16th St, Gainesville, FL 32608, or the charity of your choice.

To order memorial trees or send flowers to the family in memory of Richard "Dick" Helmig, Sr., please visit our flower store.