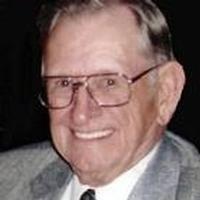 Dick graduated from Plainview High School in Plainview, TX in 1952, and attended College at Texas Tech University in Lubbock.

On November 6, 1976, Dick was united in marriage to Betty McDaniel in Columbia. She survives at the home.

Dick worked as a Sales Representative for Austin Products and Gehl Company selling farm implements. He also drove the OATS bus for a number of years.

Dick was a member of St. John's United Methodist Church in Linn and enjoyed animals, especially his birds which he loved to feed.

In addition to his parents, Dick was preceded in death by one son, Richard "Rick" Tilson.

Funeral Services will be held at 11:30 a.m. on Friday, June 14, 2013, at St. John's United Methodist Church in Linn with Rev. Floyd Gudde officiating. Interment will follow in the Linn Public Cemetery with full military honors.

Expressions of sympathy may be made to Wounded Warrior Project, PO Box 758517, Topeka, KS 66675, website www.woundedwarriorproject.org.

To order memorial trees or send flowers to the family in memory of Richard Earl Tilson, please visit our flower store.