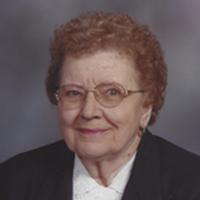 Rita was born on April 2, 1922, in Argyle, a daughter to the late Stephen and Margaret (Boeckmann) Schwartze.

Rita and her husband were livestock farmers and MFA Insurance agents for 29 years retiring in 1976.

Rita was a member of St. George Catholic Church, St. Ann's Sodality where she served with the bereavement committee for 30 years and VFW Post #4756 Ladies Auxiliary.

She enjoyed gardening, needlework, playing bingo, always up for playing dominoes and a good card game. Rita was an excellent cook famous for her cinnamon rolls and homemade pies.

Mass of Christian Burial will be held at 4:00 p.m. on Sunday, September 11, 2016, at St. George Catholic Church in Linn with Fr. Daniel Merz as the celebrant. Interment will follow in the St. George Parish Cemetery.

In lieu of flowers, expressions of sympathy may be made to the St. George Capital Campaign Fund and St. Mary's Hospice.

To order memorial trees or send flowers to the family in memory of Rita H Maasen, please visit our flower store.