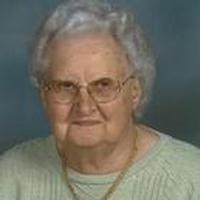 Rita Elizabeth (Plassmeyer) Mengwasser, in her 97th year and a resident of Rich Fountain, Missouri passed away on March 31, 2012 at St Mary's Health Center in Jefferson City.

Rita was born on April 11, 1915 in Westphalia, a daughter to the late John H. and Mary Elizabeth (Loehner) Plassmeyer.

Rita was united in marriage to Adolph C. Mengwasser on January 5, 1938 in Westphalia. After Adolph died suddenly in 1968, Rita raised the 4 youngest children still living at home.

Rita was an active member of Sacred Heart Parish in Rich Fountain for 74 years and was a veteran member of the St. Ann's Ladies Sodality and the Sewing Circle. She enjoyed quilting, her flower garden, sewing and embroidery and spending time with her family and friends.

In addition to her husband and parents, Rita was preceded in death by: one son, Mark Mengwasser in 1972, a granddaughter Lisa Mengwasser Blomberg, three brothers, Herb and his wife Esther Plassmeyer, Ben Plassmeyer and Tony Plassmeyer and two brothers-in-law Lynn Thurman and Forrest (Sheriff) Hodges.

Mass of Christian Burial will be at 11:00 a.m. Wednesday, April 4, 2012, at Sacred Heart Catholic Church with Fr. Phil Niekamp as the Celebrant. Interment will follow in the Sacred Heart Parish Cemetery.

In lieu of flowers expressions of sympathy may be made to Sacred Heart Parish School.

To order memorial trees or send flowers to the family in memory of Rita Elizabeth Mengwasser, please visit our flower store.