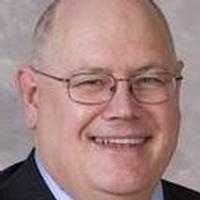 Ronald J. "Ron" Jost, 59, of Morton, passed away on September 2, 2016, at OSF St. Francis Medical Center in Peoria, surrounded by family and friends. Ron was called home by His Lord and Savior, Jesus Christ, after a short, but fierce, battle with a rare cancer.
He was born on March 24, 1957 in Cape Girardeau, MO to Frank F. and Linda L. (Chicowlas) Jost, Jr. He graduated from Linn High School in Linn, MO in 1975. He was a veteran of the U.S. Army and served in the Chemical Corp at Edgewood Arsenal-Aberdeen Proving Ground in Edgewood, MD from 1975 to 1978. He married Donna L. Tasker in Concord, NH on July 21, 1978. Ron received multiple degrees from the University of Missouri-Columbia and was a diehard Mizzou fan, win or lose.
Ron worked as a Medical Physicist in Radiation Oncology in Philadelphia, PA and Ann Arbor, MI, before moving to Illinois. For twenty-eight years, Ron was blessed by serving in God's ministry at OSF Saint Francis Medical Center in various roles, most recently as Vice President, Strategic and Facility Planning. He loved the Lord and was a member of Bethany Baptist Church in Edwards, where he was involved in the Bethany Choir, Sunday School, Small Group, and Kidz Heart Ministries.
He was preceded in death by his maternal grandparents, Edward and Mary Chicowlas, and his paternal grandparents, Frank F. and Flossie L. (Lam) Jost, Sr.
Ron is survived by his wife, Donna; son, Greg of Peoria; daughter, Chelsea of Morton; parents, Frank and Linda Jost of Bonnots Mill, MO; brother, Randy (Vickie) Jost of Westminster, CO; sisters, Melissa (Randy) Helmig of Florissant, MO; Cindy (Gary) Ruether of Jefferson City, MO; grandson, Adam Jost of Osceola, IN; and several nieces and nephews.
Funeral services will be at 11 a.m. on Friday, September 9, 2016, at Bethany Baptist Church in Edwards, with Dr. Ritch Boerckel officiating. Visitation will be from 5 to 7 p.m. on Thursday, September 8, 2016, also at the church. A private interment will be at Riverview Cemetery in Jefferson City, MO.
Memorial contributions may be made in Ron's name to the Kidz Heart Ministries or the Adoption Ministry, both at Bethany Baptist Church.
Ron's family wishes to extend a sincere thank you to his OSF family and to all the physicians, nurses and staff, who served Ron until the end, with the greatest care and love.
Funeral arrangements have been entrusted to Clary Funeral Home, 3004 West Lake Avenue, in Peoria.

To order memorial trees or send flowers to the family in memory of Ronald "Ron" J. Jost, please visit our flower store.