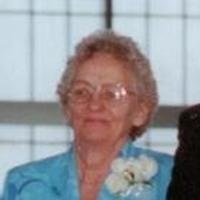 Rose was born December 20, 1925, in Rich Fountain, a daughter to the late Michael and Elizabeth (Bock) Rudroff.

Rose was a homemaker and of the catholic faith. She enjoyed quilting, fishing, and spending time with her family.

In addition to her parents and spouse, she was preceded in death by: one son, Kenneth Wilson; two sisters, Marie Maassen and Febronia Boehm; and one brother, Ernest Rudroff.

Funeral services will be held at 11:00 a.m. on Tuesday, April 9, 2013, at Morton Chapel in Linn with Fr. Phil Niekamp officiating. Interment will follow in the Oklahoma Church of Christ Cemetery.

To order memorial trees or send flowers to the family in memory of Rosalia A. Wilson, please visit our flower store.