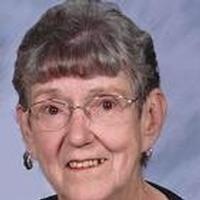 Rosanna was born November 23, 1933, in Bonnots Mill, a daughter to the late Fred and Agnes (Bonnot) Meamber.

Rosanna was a 1951 graduate of Loose Creek High School.

On June 6, 1953, she was united in marriage to Vincent F. Backes at St. Louis of France Catholic Church in Bonnots Mill. He preceded her in death on January 30, 2013.

Rosanna worked over 30 years for the Department of Revenue in Jefferson City before retiring as an Investment Officer.

In addition to her parents and her spouse of 59 years, she was preceded in death by an infant brother, Julius.

Mass of Christian Burial will be held at 11:00 a.m. on Saturday, December 6, 2014, at St. Louis of France Catholic Church in Bonnots Mill with Fr. George Kramer and Fr. Don Antweiler as concelebrants. Interment will follow in the St. Louis of France Parish Cemetery.

To order memorial trees or send flowers to the family in memory of Rosanna K. Backes, please visit our flower store.