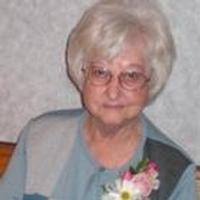 Prior to retiring Rose worked as a nurses aid at a nursing home in Linn. She was a member of the First Baptist Church in Linn and enjoyed bird watching and spending time with her grandchildren.

In addition to her husband and parents, Rose was preceded in death by: six brothers, Frank, Leslie, Howard, Earl, Walter and Clifford Branson and three sisters, Laura Mitchem, Irene Farrington and Hazel Branson.

Visitation will be held from 11:00 a.m. until 1:00 p.m. Wednesday, April 27, 2011 at Morton Chapel in Linn. Funeral Services will follow at 1:00 p.m with Rev. David Krueger officiating. Interment will be in Linn Memorial Park Cemetery.

Expressions of sympathy may be made to the donor's choice.

To order memorial trees or send flowers to the family in memory of Rose E. Wilson, please visit our flower store.