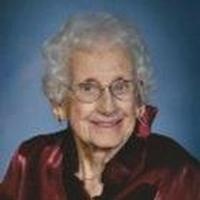 Ruby Jewell Baker, age 103, of Loveland, Colorado, formerly of Linn, beloved Mother, Grandmother, Great Grandmother, and friend, went to be with the Lord on February 25th, 2014, at the Medical Center of the Rockies in Loveland.

Jewell was born, October 11, 1910, near Linn, a daughter to the late Edward J. Carey and Polla E. (Regnier) Carey. She grew up on a farm near Linn and graduated from Linn High School in 1929.

On August 16, 1934, Jewell was united in marriage to Oscar L. Baker in Belle, Missouri. They had one daughter, Dixie Darlene, born in 1940 in Linn.

Jewell and Oscar lived in Belle and Cooper Hill, Missouri; Burr Oak, Kansas; Kensington, Kansas; Marysville, Kansas and Garnett, Kansas before moving to Loveland, Colorado in 1991 to be near their daughter and families. Jewell and Oscar were married for 58 years until his passing in 1994.

Jewell was a teacher and homemaker and began her teaching career in a one-room schoolhouse in Osage City, Missouri. She continued teaching in Burr Oak and Kensington, Kansas. She was a lifelong member of a family originated country church, Oklahoma Church of Christ, near Linn.

Jewell and Oscar enjoyed traveling and participating in antique shows during their retirement years, both becoming experts in antiquities. Jewell had lived at Good Samaritan Village in Loveland, Colorado for over 23 years where she volunteered numerous hours from working the front desk to taking meal tickets. She volunteered well into her 103rd year. Among her many talents, she was especially known for her sewing and crafting skills. Her one-of-a-kind handmade aprons had a tremendous following at local craft shows, where she regularly participated and displayed her unique crafts. Her biggest passion however, was all her great grandkids and sharing numerous childhood memories with them.

In addition to her husband, Oscar Baker, and her parents Edward and Polla, Jewell was preceded in death by: three sisters, Elma, Jessie, and Cleo; and one brother, Enos.

In lieu of flowers, memorial contributions may be made to "Oklahoma Church of Christ Cemetery Fund" in care of Morton Chapel, P.O. Box 77, Linn, Missouri 65051.

To order memorial trees or send flowers to the family in memory of Ruby Jewell Baker, please visit our flower store.