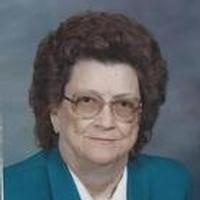 Shirley was born on October 7, 1937, in Mokane, a daughter to the late Clarence Scott and Ruth (Huffman) Scott Hile.

On August 21, 1954, she was united in marriage to Arthur Riegel at St. George Catholic Church in Linn. He survives at the home.

Shirley was a member of Most Pure Heart of Mary Catholic Church in Chamois. She enjoyed working crossword puzzles and watching high school sports. However, her greatest love was spending time with her family and friends.

Shirley was a loving wife, mother, grandmother and great grandmother. In addition to her husband Art, she will be lovingly remembered by: three sons, Clarence "Ralph" Riegel and his wife Debbie of Rhineland, MO, Elmer Riegel and his wife Deborah of Montgomery City, MO, and Russell Riegel of Kansas City, MO; one daughter, Kimberly Ames and her husband Terry of Chamois; eight grandchildren and 13 great grandchildren; and two sisters, Lessie Mae Edwards of Fulton and Ruth Marie McGuiness of Seymour, IA.

Mass of Christian Burial will be held at 10:30 a.m. on Wednesday, April 16, 2014, at Most Pure Heart of Mary Catholic Church in Chamois with Fr. David Means as the celebrant. Interment will follow in the Parish Cemetery.

Arrangements are under the direction of Morton Chapel, Chamois, MO. (763-5522)
www.mortonchapel.com

To order memorial trees or send flowers to the family in memory of Shirley J. (Scott) Riegel, please visit our flower store.